The largest & most expensive film sets ever 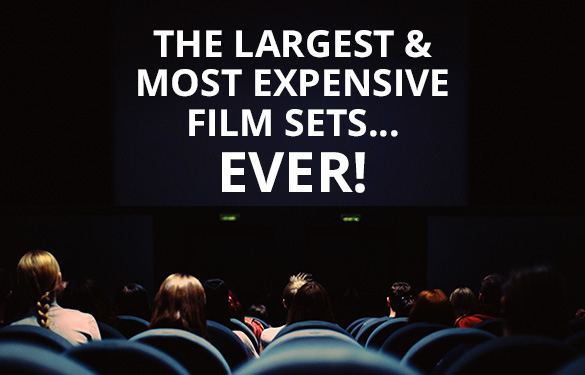 With over 100 years of movie making, the demands of film directors and Production have soared and with that, film sets.

It feels as though movies are just getting bigger and bigger and I don’t just mean the size of the Box Office takings in week 1 of a new blockbuster release! I’m also referring to other HUGE statistics which seem to just blow our minds away like the gargantuan film sets being built to how much cash is being spent to build these epic sets.

We should look at then, the impressive film sets definitely worthy of mentioning, dating back as far into Hollywood as the early eras of the 20th Century. Set designers were hired to now create more impressive and detailed backdrops to early films as their budget and vision grew!

The production and design implementation of these sets is more sophisticated and impressive than ever, each year a new movie out-does the budget and size of the benchmark set only the year previous.

Whether it’s designing and building a “New York City” in 2050, creating detailed ancient ruins and iconic landmarks or building exact replicas of scenes from real life non-fiction; it can take many hundred designers and artists months (commonly, years) of hard work and craftsmanship to have these sets planned and constructed.

Working almost round-the-clock sometimes, engineers often will be communicating over two way radios due to the sheer size and density of the sets.

We’re going to condense the top largest and most expensive film sets ever down to 10. To begin, let’s take a look firstly as some of where it all started back in the early-mid 20th Century.

Now that seems like a huge amount to spend back at the turn of last century! Crazy money (and by applying inflation, we’re talking around $47m today).

The life-size structure of the Great Wall of Babylon (as well as over 3,000 extras) really made this set a big one for it’s time. In fact, it’s so vast and impressive that sets made with this kind of scale are equally as impressive today. Standing at around 1,000 ft high and over 5,000 ft wide, director D.W Griffith was producing works like this considered a landmark in cinema.

It was the famous Chariot Arena recreated that really made this a stand-out movie from last century (nearly 60 years ago). This was the largest set in history at the time!

It took over a year for 1,000 workers to carve down in a rock quarry to create this arena. Based on Jerusalem Circus, the building also factored in grandstands and other wooden structure. A staggering 8,000 extras were required for the filming as spectators in the arena.

Budget Spent on Set: Way more than the $2m budget!

One of the most staggering things to note here is how the costs ballooned from a modest $2m budget to a massive estimated $44m. A little overspending here and there must’ve happened. This almost bankrupted 20th Century Fox.

Unfortunately with such high costs building the entire set of Cleopatra, it meant that despite a great run at the box office, takings still failed to cover the cost of production and the advertising.

James Bond movies to this day have always drawn in die-hard fans and the budgets for the film sets have been equally as impressive. The set of Blofeld’s iconic Volcano HQ, stood at over 148 ft high, created at Pinewood Studios at a cost of $1m.

Interestingly, the cost to build just this set exceeded the entire production budget of Dr No…

Designed by Ken Adam, his response to producer Cubby Broccoli when asked how much it was going to cost went something like this:
Cubby: “I had no idea obviously. ‘Well, will a million dollars be enough?’
Adam: ‘Sure’…”

Moving forward a couple of decades, WarGames was a high-tech action adventure movie which had the famous Norad Center constructed. This was based on Director John Badham’s version of the Norad Centre for Research as he wasn’t allowed access.

This film has some infamous statistics – mainly because it was considered a “high profile flop.” The set, built for Waterworld was a post-apocalyptic sci-fi movie starring Kevin Costner, was a giant atoll weighing over 1,000 tonnes with a circumference measuring ¼ of a mile!

At over $175m, it was the largest total movie spend of it’s time. However, many construction problems occurred notably, the horrendous weather. So, while expenses racked up in the production of this huge film, it was such a box office success it more than made it’s money back.

With a $200m budget, James Cameron’s decision was to build the ship representing a 90% scale build, subsequently too large for any studio, therefore the 100 Day Studio was built off the coast of Mexico. The interior of the ship was actually constructed based on the Titanic’s sister ship, The Olympic due to more photographic evidence available.

To try and save on costs, only the starboard side of the ship was built.

The film was an absolutely massive success, with box office takings of over $2bn.

The bloody battle from World War 2, this movie was created in an impressive IMAX 3D version. The aim of this film was to try and capture the scale of the immense horror back in 1942, with a set representing as it looked. Over 400 people spent a total of 12 months building, researching and constructing the famous set.

Constructing sets over this kind of period would inevitably involve workers and sound engineers tirelessly working and in constant communication with one another – if only devices such as a two way radio were available back in the days of Cleopatra!.